The reconstruction of the siding track in Szigetvár has been completed

The construction on the Szigetvár station TDE siding and industrial area reconstruction project began in September 2019, and the technical handover has been completed in these days.

Szigetvár station KITE agricultural siding track and industrial area were rebuilt on behalf of TDE ITS Kft. For the subsequent construction of a rock-oil discharge facility at the industrial site, the service railway network was completely renovated by Homlok Építő Zrt.

As part of the project, the railway network was rebuilt in a length of almost 2 km-s, starting from the 60th railway line branching of MÁV Zrt., with the installation of 5 groups of turnouts, of which 2 groups are electric and 3 groups are manual. In parallel with the track reconstruction works, a reinforced concrete culvert was built, and an existing culvert was also renovated. Turnouts on the main line are equipped with alternating heating and as a new safety device, an axle counter device was built on these turnouts of the branch. According to the contract, connecting a new safety device to the existing mechanical system was also a task.

On the site, protection against slipping as well as telecommunication connection have also been installed at the unloading tracks, thus ensuring the normal, safe operation of it. The unloading track was given a complete space lighting.

At the beginning of the project, the first major construction milestone was the reconstruction of the No. 1. turnout of the 60th railway line branching at the end of last year, in continuous track lock for 52 hours, after the necessary demolition and earthworks.

At the beginning of this year, the project continued with cable replacement works, then the laying of cables for space lighting, interlocking, telecommunications and alternating heating had begun along with the construction of the necessary mines and under-rail passages. Meanwhile, construction work had begun on the drain, the ditch, and the paved ditch and the site’s water supply network had been also completed.

In the next phase of work, track formation was built for turnouts near the main branch (nr. 1/1, ½), detours have been tied up. Track construction has begun within the site, first on tracks T2 and T3 at the beginning of March. Turnouts at the site were scheduled to be installed back this month and the railway network has been built throughout the work area, together with the reconstruction of the HS2 crossing. STRAIL elements were installed in the crossing and received a new asphalt pavement 30 meters long.

During the summer, SOMAKER-type remediation trays were installed at two locations, as well as a dynamic track scale, which fulfilled the contracted technical content and the technical handover of the project could start, as well as the procedures and documents required for closure.

The technical handover was successfully completed on 27th of August 2020, free from errors and deficient. Overall, it was a nice technical task which was implemented in the construction of Homlok Zrt. 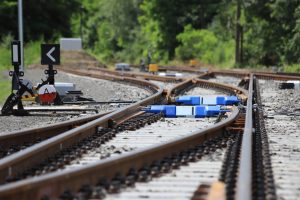 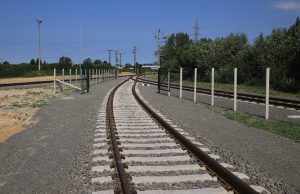