The construction, which started in September 2019 gained great momentum with the arrival of the good weather, and the reconstruction of the KITE siding and industrial area of the Szigetvár station has reached a spectacular stage.

By the end of last year, after the demolition and earthworks, the reconstruction of bypass No. 1 of railway line 60 was completed, which was carried out within the framework of a 52-hour continuous track obstruction.

Subsequently the necessary cable replacement works were completed in January, then the cable laying for space lighting, interlocking, telecommunications and changeover heating had begun, together with the construction of the necessary shafts and under-rail passages.

For several weeks at the beginning of the year, intensive construction works of the leaky, the trench and paved trench were taken place, but the water supply network of the premise was also completed as well, together with the connection to the network of Baranya-Víz Zrt.

The railway network had been built during the spring and the railway track regulation works also started, which is performed by VASÚTVILL Ltd. as subcontractor.

The construction works were aggravated by the scarcity of the work area and the difficulty of accessing it in the section between the main line junction and the level crossing, so the coordinated work and continuous consultation of the different disciplines was especially important in keeping the schedule in this area.

Overall, the construction works are progressing well, according to the contract the project has to be completed by the end of the summer. 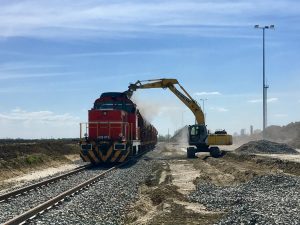